Virtual reality (VR) is one of the most exciting technologies in seniors’ care innovation today. Based at York Care Centre, researcher Sherry Law is introducing VR to long-term care residents and testing whether VR sessions can improve their well-being. She’s also investigating how the technology might be used as a mental health treatment. The project is funded by the Centre for Aging + Brain Health Innovation (CABHI)’s Spark Program and the New Brunswick Health Research Foundation (NBHRF).

Sherry joined us for a Q&A about her work.

What interested you in exploring virtual reality in long-term care?

The idea for my project came in 2013 when my own grandmother was nearing her end of life. She lived in Hong Kong, in an environment similar to that of long-term care. I wanted desperately to assist her, but being separated by distance I could only turn to technology to help in any significant way. That was also around when I first began hearing about VR prototypes being developed and made available, so naturally I considered it as a way to improve my grandmother’s situation. 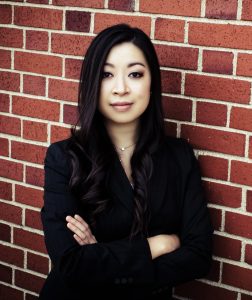 VR can be an accessible and affordable means for leisure activities in long-term care. It can put users in calming or enjoyable settings, like a room full of puppies, or help them experience things they may not otherwise be able to do, like riding a roller coaster. VR can also take users to a different part of the world—for example, they can ‘sightsee’ at Big Ben in London, England. This way they can safely take a mini-vacation when they feel like it. All of this could have a positive effect on their mental health.

What’s the feedback been from participating residents?

Residents have expressed joy and amazement at some of the virtual worlds that we have travelled to. Often when the participant chooses to travel in VR, they begin recounting their past travels or telling stories about where they grew up.

Some are younger residents who feel left out of being able to participate in technological advancements like computers or smartphones, so being part of the CABHI project helps them feel like they’re catching up.

One of the participating residents used to be a teacher and lamented the fact that VR hadn’t been available as an educational tool when she was teaching. She believed the technology could do great things for residents. Another always reserves time in our sessions to ride some roller coasters, which she’d never been able to do because of physical limitations. Sometimes she swears by accident because of the thrill! It’s a joy.

What long-term impact will the CABHI project results have?

If the data indicates that VR can improve residents’ moods, the technology could be implemented in York Care Centre and other long-term care centres in Canada as a supplementary tool to alleviate mood or mental health concerns in the population.

The benefits of improving mood in long-term care residents are multi-faceted. An improved mood could boost participation in rehabilitation or medical intervention, improve cooperation between the resident and staff, decrease aggressive incidents, and potentially increase overall health by reducing stress. These advantages could be translated into financial benefits as well.

How’s your experience been working with CABHI?

Everyone on CABHI staff has been gracious with their time, helpful with answering questions, and reassuring when I felt discouraged. They’ve offered many supportive services to help me not only complete my project, but also expand it and scale it up.

I would also say that CABHI’s holistic approach to supporting their innovators’ development as businesspeople and leaders is an amazing value add to the Canadian market. They empower entrepreneurs and provide them with the tools needed to succeed. It’s a very special thing.