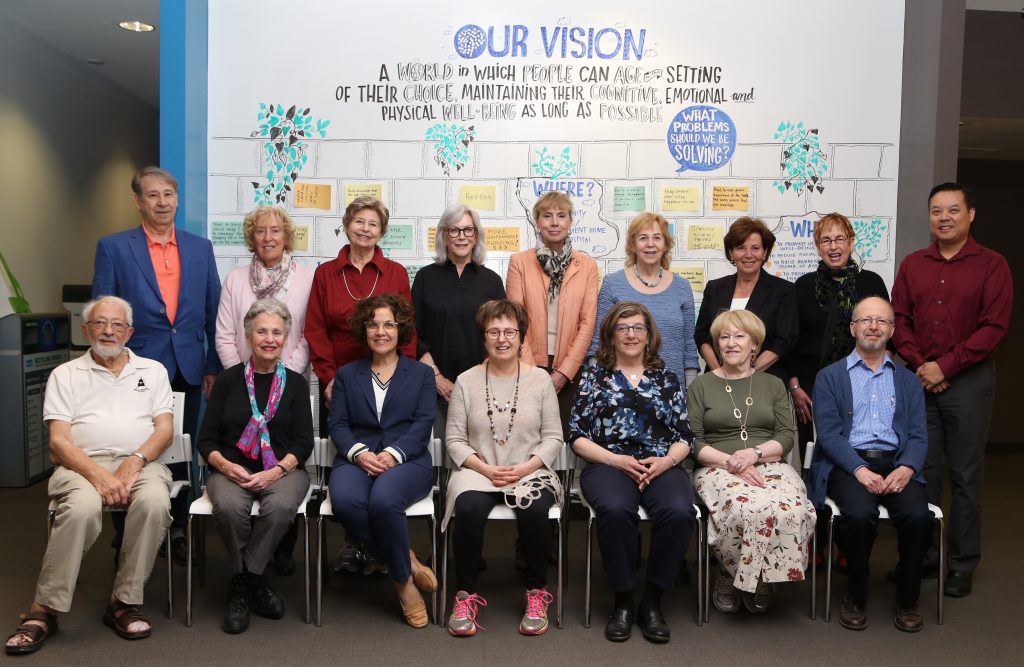 End user input is critical for success in the marketplace. The Seniors Advisory Panel, based out of the Centre for Aging + Brain Health Innovation (CABHI), provides advice and support to CABHI-funded innovations in aging and brain health from the perspective of their lived experience.

Founded in 2016, the Panel is a group of 18 older adults and caregivers with broad professional and life experience. Many members have been caregivers to loved ones who are experiencing, or have experienced, brain health issues.

SAP represents the voice of the consumer. The Panel provides valuable end user input to CABHI projects at all stages of development, including:

To date, the Panel has provided input to many innovators who have benefitted from their constructive insight.

“Everyone was very engaged. Not only was feedback open, it was constructive – we’ve taken away some valuable insights from potential end users of our solution to incorporate into the design of our final product.” – Linda Kaleis, Lead Data Scientist, MEMOTEXT

Learn more about our members below.

Laurie worked as a nurse practitioner at Trillium Health Partners and as a clinical nurse specialist at Baycrest. Her passion for understanding and supporting older adults, their family members and caregivers has always been central to her career.  Laurie’s role as a nurse has allowed her to provide care for older adults in a variety of settings including their homes, clinics, in-patient care and community fall prevention programs. Laurie also held a position as an assistant lecturer at York University and as an adjunct lecturer with the Faculty of Nursing at the University of Toronto. She is currently an interprofessional educator at Baycrest.  Laurie enjoys music, painting, skiing, baking, and volunteering and loves being with her family and grandchildren. She hopes to bring her professional and personal care experiences to the Seniors Advisory Panel and is eager to learn about innovations that can make a meaningful difference in the lives of older adults and their communities.

Deborah worked in the film and television industry for over 30 years, many of which were spent at the CBC, English Television Network. In her last position there as the Executive Director of Arts and Entertainment Programming, she oversaw the development, production and financing of drama, comedy, arts, variety, children’s and youth programming. After that, Deborah taught for many years at Ryerson University and Humber College. She continues to teach Creative Producing at Humber. While completing her education, she worked in counselling and consulting in the area of women’s advancement in the workplace. Deborah also volunteers with the Ve’ahvta Street Academy. She sits on the Boards of The AFC (formerly the Actors’ Fund of Canada) and Raindance Canada. She is a member of the Advisory Committee for the Hot Docs Ted Rogers Cinema.  Deborah holds an Ed.D. from O.I.S.E. at the University of Toronto.

Hilary Randall-Grace is a retired Certified Accountant whose career was devoted to risk management consulting (cultural, strategic, and operational risk), quality client service, governance and ethics. Her passion for seniors and the brain stemmed from eight years of intense caregiving for her parents. She has experienced the challenges facing aging adults and their caregiving families and strongly believes that our seemingly “throw-away society” has left seniors, and their potential for contribution, unappreciated.

After retiring, Hilary attained a Graduate Certificate in Gerontology (with Honours) from Durham College. She currently is Co-Chair of CABHI’s Senior Advisory Panel and leads a Working Committee on expanding the Diversity and Reach of end-user engagement in Innovation. Her other volunteer work includes facilitating spousal and adult children caregiver support groups for the Alzheimer Society and delivering recreation programs to seniors with dementia in a long-term care facility. Hilary is married with one son and loves dogs, travelling, and cooking.

Ron is an experienced family caregiver to his late father that lived well with Alzheimer’s for over 10+ years while partnering with his senior mother during their journey. He is an advocate in the dementia and aging communities with expertise in technology, aging in place, caregiving, and patient engagement with special interests in Dementia and Age Friendly Communities, living safely, remote caring, and research. Ron is co-chair for AGE-WELL NCE’s Older Adults and Caregiver Advisory Committee, advisor and presenter for Alzheimer Societies and Dementia organizations locally and internationally, member of City of Toronto’s Senior Strategy Accountability Table, mentor and judge at over a dozen dementia and health hackathons/pitch competitions, and collaborator/advisor to research, industry, and start-ups. In current and past endeavours, Ron has successfully started non-profit and commercial enterprises, worked in collaboration with federal, provincial, and municipal governments, and is constantly networking in various communities to bring key stakeholders together.

Toby held several positions at the McGill Daily, and after graduation and marriage worked for the Vancouver Province (newspaper) as a weekly columnist. She was also Press Officer at the Canadian Jewish Congress national headquarters in Montreal and was editor of its monthly publication. After raising five children, she had almost completed the Master of Social Work Program at Carleton University, when she was persuaded to help found a tri-lingual French immersion school in Ottawa, and served as its administrator until moving to Toronto and volunteering at Baycrest in various programs. Toby majored in economics and political science at McGill University.

Sue spent most of her career in the pharmaceutical industry overseeing the Regulatory function (getting new drugs approved and otherwise working through the regulatory maze) in senior management positions for multi-national companies. She’s now happily retired, taking courses, travelling, cycling and serving on two volunteer boards.  Sue has played a primary role in looking after 2 elderly parents with dementia, and is looking forward to participating on the Seniors’ Advisory Panel to contribute to improving the lives of seniors and caregivers.   She would like to bring her scientific writing, team mentoring, and strategic thinking skills to the projects she becomes involved with. Sue holds a B.Sc. in Chemical Engineering from Rutgers University.

Until 2010 Ian was an I.T. business analyst for Sanofi Pasteur (previously Connaught Labs). There he coordinated teams of scientists and technologists in evaluating and deploying software to improve processes. Previously he formed a consulting company that focused on assisting clients to determine and use the best software for their stated purpose. Ian’s volunteer experience entails working in various senior centres showing clients how to use software and apps e.g. Facebook, Twitter, Google Hangouts to stay connected with family, and pursue interests. He has also acted as a co-facilitator for the Minds in Motion program for Alzheimer Toronto. Since 2016 he has provided lived experience to three innovation projects for technology in aging. Born in Leeds, U.K. where he “distance managed” care to his Mum for 8 years, Ian loves to travel, learn, and share the experiences with those he works with.   Ian holds a degree  in Natural Sciences for Chemical Engineering from Cambridge University.

Anne is a professional accountant with over thirty years of senior management experience. She has worked in Real Estate Development, Academia, for a Crown Corporation and Not-For-Profit Organizations in positions including Vice-President and Executive Director. After retiring she has volunteered with organizations that promote vegetarian diets as well as meditation and healthy lifestyle practices. She has taken courses on the workings of the human brain as well as reading about how the future of technology may enhance the human experience. Anne believes strongly in physical fitness being an overall benefit to all aspects of health. Anne hopes that the combination of business acumen along with her lifestyle practices will be of benefit to the panel and help improve the lives of seniors.  Anne completed her university education in Scotland and holds a CPA designation.

Renee worked as the Director of Physician Relations at Dynacare Health Solutions before retiring in spring of 2019. During her 30-year career at Dynacare, Renee designed programs and influenced leaders to add value to patient care in the community, long-term care facilities, retirement homes and home care. In her position, she oversaw the delivery of laboratory services, promoted new healthcare solutions, endorsed leading-edge genetic testing, supported the design of an excellent customer experience and helped advance the development of digital solutions for both patients and physicians. After her retirement she began volunteering for Baycrest@Home – a suite of non-traditional services designed to help older adults living at home. Renee is hoping to use her 30 years of experience in Canada’s challenging healthcare environment to help CABHI and Baycrest@Home advance solutions that will improve the future of senior care.

Walter is a professional engineer licensed in Canada and the European Union. He was elected by his peers to the honour of Fellow of the Institution of Mechanical Engineers, thereby placing him amongst the top 7% of engineers worldwide. When he retired from this first career, he was the International Vice President of one of the largest worldwide engineering contracting companies, involving continuous worldwide travel. He frequently interfaced on behalf of the company’s clients at senior government levels in Canada and abroad. He represented Canada on two UN bodies (UNESCO and UNITAR). His second career was as an arbitrator and mediator, including conducting mandatory mediations for the Superior Court of Ontario. Walter currently volunteers as a senior lay leader in a Toronto synagogue and in IT and research functions at Baycrest. His main hobby is photography and the production of documentary videos.

Rachel spent most of her career as a teacher, both as  a kindergarten and middle school teacher. She then had the pleasure of working with university students as a Professor at York University where she continues to work as a Senior Scholar in the research area of social gerontology. Her interests include taking classes, walking, games,  cards, travel, reading, and the arts. Thanks to sabbaticals, she has lived in India, Jamaica, Australia, New Zealand. She has been on the local and national boards of HadassahWizo. In Toronto, she was a board member of the Red Door agency. Rachel graduated from Cornell University with a B. Sc. and a Master of Arts M.A. She also holds a  Doctorate in Education from OISE, at the University of Toronto. She has worked in research most of her professional life, and would like to apply these skills to the exciting initiatives at CABHI.

Bev worked for 24 years for the Ontario Government in a variety of capacities in the Ministry of Community and Social Services: Vocational Rehab Counsellor, Program Supervisor for Programs for Developmentally Handicapped, Halfway House and Employment programs, and Program Manager of Employment Programs. Post retirement from government, she worked in a variety of capacities in the private sector, most recently as a facilitator in Disability Management, currently for Morneau/Shepell. Being interested in our brains as we age and in particular neuroplasticity, she has read and taken courses about the brain for the past few years and was very interested to hear about the Senior’s Advisory Panel and the opportunity to be involved in a meaningful way in innovations. Bev has an MA in sociology.