Often times, the best ideas surface when people with different perspectives join forces. Earlier this month, the Baycrest-led Centre for Aging + Brain Health Innovation (CABHI) welcomed more than 60 high school students from William Lyon Mackenzie to participate in ideation workshops. The inter-generational event offered a unique opportunity for students to interact and collaborate with members of our Seniors Advisory Panel – a group of older adults from all walks of life who advise CABHI. Members of CABHI’s Seniors Advisory Panel shared their perspective and engaged with the high school students throughout the session.

Led by Bianca Stern, CABHI’s executive director, health innovations, the students learned about the needs of aging adults and brainstormed innovations that could impact this growing population. The session marks the beginning of an exciting partnership between CABHI and the Toronto-based high school.

“Bianca shared with us what CABHI does and what the organization could offer,” explains Cindy Law, a science teacher from William Lyon Mackenzie. “And I jumped at the opportunity.”

Cindy’s students are taking part in this year’s ExploraVision, a nationwide competition that challenges youth to envision new technologies and project them 20 years from now.

“The partnership with CABHI works so well with the ExploraVision contest that I’m running with my students. The biggest hurdle to this contest is defining the problem that the students want to solve. Once you truly understand the problem, it is relatively easy to dream big in order to come up with possible solutions. Bianca made such an eye-opening comment to me: ‘To define a problem, you need to know what the problems are from talking with people – an empathy piece.’”

Indeed, a number of students said they gained a lot from interacting and hearing the stories of older adults during the session. “We learned it’s important to focus on the people who will actually use the innovation,” shares a Grade 12 student.

“[CABHI] provided us not only with a space to generate solutions, but also access to the Seniors Advisory Panel,” says another student. “And CABHI also presented other companies that are thinking about similar projects and connected us to them. I think it’s a really great environment to work in and I’m thankful for this opportunity.”

The workshop, delivered three times for different classes, took the students through an ideation process. “We had them brainstorm in small groups and utilize different modalities to promote the process of ideation; whether it was speaking with their peers and writing ideas on paper, talking in smaller and larger groups, and using the whiteboards,” says Alana Bernick, an Occupational Therapist who is acting as a liaison between CABHI and the high school.

Alana says there are three phases to the project – the first of which involved a pre-reflection where students were encouraged to think about what aging means to them. “We wanted to get at two things: we wanted them to be more aware of some of the stereotypes; the discourse that is at play in our society and how that funnels down to our everyday conversations with people and how we engage with older adults. At the end of the day, the goal was focused around design. We wanted them to take that idea of design and explore what it is within our environments, people, and in carrying out meaningful activities, that are challenges for older adults. What are some of the successes that older adults are experiencing and how can we capitalize on that success?”

Having completed the pre-reflection phase and the collaborative workshop, the next phase for the students will involve continued support from CABHI. The students are invited to use the unique CABHI space – including rooms with floor-to-ceiling white boards – while they’re developing ExploraVision proposals. Alana will also connect interested students with relevant researchers, clinicians and entrepreneurs who can help nurture their ideas.

“I think the continuous connection that we have with CABHI, the continuous mentoring, is really important,” adds Cindy. “Because once the students formulate a potential solution, they can actually check in with someone who has expertise in the area and would be able to assess whether their solution is something that is truly innovative.”

Stay tuned to CABHI’s blogs for updates on this unique collaboration. In the meantime, click through the gallery below to see photos from the ideation session. 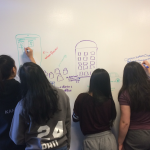 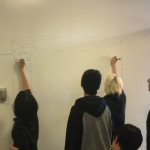 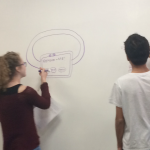 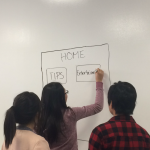 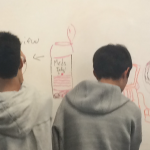