Home » Aging » An audiologist’s quest to empower seniors through hearing

Picture this: you’re sitting at a restaurant with your friends and family. There’s tons of noise around you, from the clinking of cups to the shuffling of people entering and leaving. The conversations stemming from nearby tables are overbearing thanks to the amount of laughter.

Many of us would have little issue hearing the people sitting next to us in this scenario. However, this everyday situation can be incredibly overwhelming for seniors experiencing hearing loss.

“We’ve known forever that hearing loss often results in social isolation,” says Marilyn Reed, Baycrest’s professional practice leader for audiology. “ If people can’t hear well, they can’t converse well and they can’t socialize. They feel embarrassed and frustrated and as a result, they tend to withdraw and become socially isolated. We now know that social isolation is a huge risk factor for other age-related health issues, one of which is cognitive decline. One  possible pathway is through depression, which often occurs as a result of loneliness and social isolation.”

The link between hearing loss and cognition

Indeed, the link between hearing loss and cognitive decline has garnered a ton of attention in the media. That’s in part thanks to a recent article published in medical journal The Lancet, which identified nine risk factors for dementia – one of which was mid-life hearing loss. “The interesting thing about the Lancet article is that it shows that we are now paying attention to potential risk factors for dementia, because we don’t have a cure,” Marilyn explains. “In the absence of a cure and given the enormous cost to healthcare, we’re now looking at potential modifiable risk factors, and there aren’t many. However, perhaps hearing loss is a risk factor that we can address in middle or later age, which could actually have some impact. If it can help your ability to socialize and feel less isolated, it can have a knock-down effect on the other age-related issues as well.”

For years, Marilyn has been conscious of the connection between hearing and cognition. The audiologist has been following a 2015 initiative at Johns Hopkins University called Access HEARS. It’s a social enterprise that provides education and low-cost hearing assistance to Baltimore seniors living in low-income areas. Rather than relying on traditional hearing aids – which can cost upwards of $2,000– the project offered seniors with previously unknown hearing loss the option of trying what’s called PSAPs, or personal sound amplification products, which are significantly cheaper. “They’re general purpose, not personally fitted amplification devices,” explains Marilyn.

Marilyn adds the program was quite successful at identifying seniors living with undiagnosed hearing loss and more importantly, offering them tools (in the form of devices and education) to help them live more inclusively. That’s how Toronto HEARS, Marilyn’s spin on the Johns Hopkins project, was born. The goal is to see whether an adapted version of Access HEARS can provide similar benefits locally. “When we heard CABHI was inviting applications, we got very excited because it’s rare that clinicians like myself have the opportunity to do this really practical community-based research,” says Marilyn. “It was a wonderful opportunity for us to take this program and really see if we could do some good with it with seniors in Toronto.”

Part of the financial support from the Centre for Aging + Brain Health Innovation (CABHI), led by Baycrest Health Sciences, has helped Marilyn trial and adapt senior-friendly education guides developed by Johns Hopkins. The support has also helped cover the cost of the pilot, allowing Marilyn and a Communicative Disorder Assistant (CDA) to deliver the program in community centres across low-income neighbourhoods in Toronto. CABHI’s support has also helped Marilyn collect outcome measures to evaluate the program and whether it should be delivered on an even larger scale. So far the feedback has been quite positive. Marilyn said at the one-month follow-up, a participant told her “[Toronto HEARS] gave me the confidence to tell people what I need in order to hear them better.”

The program consists of three sessions: the initial one involves a screening where Marilyn assesses for hearing loss. If a senior is identified with a minimum of mild hearing loss, then they are offered the intervention, provided by the CDA. This is a tailored education and counselling program combined with an (optional) affordable amplification device. In the intervention, each participant’s communication goals are identified, and they are educated (ideally along with a communication partner) regarding better hearing and communication skills.

“This is an important feature of the program because we would like to offer them helpful tools, even if they are unable to afford to buy a device” says Marilyn.

As part of the intervention, participants are offered the opportunity to purchase and learn how to use low cost personal amplification products. The two devices offered through Toronto HEARS (the CS-50+ and the Pocket Talker) were chosen based on reliability and performance.

The Pocket Talker is an easy to use, general-purpose amplifier costing $185. The CS-50+, on the other hand, is more high-tech. Priced at $350, the device sits at ear level and comes with rechargeable batteries and a number of features,including an app that allows for a hearing test and Bluetooth capabilities to sync the device with a cellphone or tablet.

The importance of education

But what if a senior can’t afford a CS50 or a Pocket Talker? Marilyn says Toronto HEARS isn’t just about these devices — a crucial part of the program is educating and providing general communication strategies.

“As we get older, we need things to slow down, and hearing aids can’t slow people down. Even with hearing aids, you’re still going to have problems in some situations. And that’s where these behavioural communication strategies have to take over.”

Communication strategies do not have to be complicated. Marilyn says they can be as simple as asking a friend to slow down while speaking, or turning off distractors such as a TV during conversations.

“There’s so much more we could do to help people other than to sell hearing aids. This is why we know this kind of educational aspect where we’re teaching people about good communication strategies is so important – especially for age related hearing loss.”

Click on our infographic for a snapshot of communication strategies and stats about hearing loss: 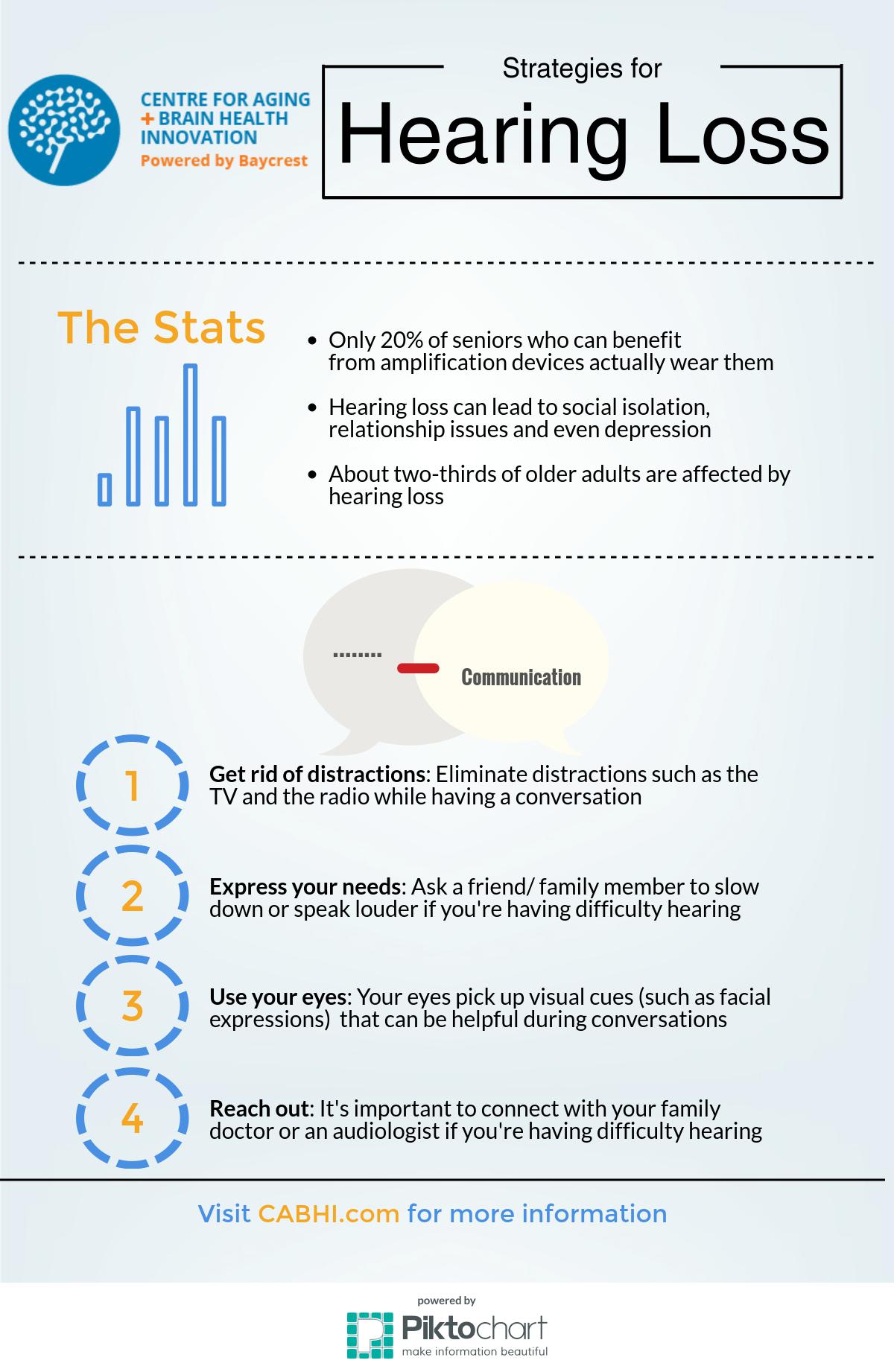 Click on our infographic for a snapshot of communication strategies and stats about hearing loss.