If you’d have asked Guyatree Kralovic to describe her father Bobby a few years ago, she would have told you he was a social butterfly. He was loud, opinionated, and told colourful stories of his youth, along with a healthy dose of corny dad jokes. 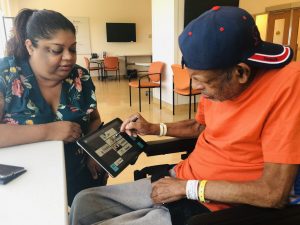 But in 2017, Bobby had a stroke. He’s somewhat recovered and has received good care since then, says Guyatree, but his speech was reduced to “yes” and “no,” pointing, and gestures. Once the life of the party, Bobby could no longer participate in conversations.

One of the biggest life changes for seniors like Bobby, who have strokes or live with advanced dementia, is the loss of ability to communicate verbally. The loss limits one’s ability to interact with family, friends, and caregivers and make independent choices, and reduces quality of life. There are only a few digital systems available that can help people like Bobby communicate more effectively, and nearly all are unaffordable or complex to use – until now. 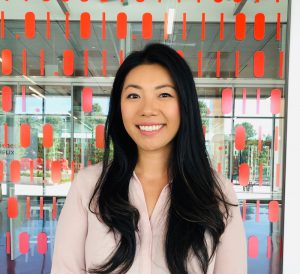 The Linggo app, developed by Seneca College professor and Board Certified Behaviour Analyst (BCBA) Ling Ly Tan, helps people with limited speech – such as those living with dementia, acquired brain injury, stroke, and other neurodegenerative diseases – communicate with caregivers, clinicians, and the world around them using an iPad or tablet.

Linggo uses a list of relevant words that match users’ daily needs, preferences, and social activities. The app incorporates intuitive visual representations to allow the user to select words to build phrases and sentences, which it then communicates in words onscreen and out loud. It also uses machine learning to adapt to the individual user by learning their language patterns and communication history, making the technology highly individualized.

Ly Tan, who worked with alternative communication systems for more than 15 years, says she always had a vision of creating an assistive communication technology that would help individuals communicate independently, helping them achieve a better quality of life. Her dream was ultimately made possible by the Centre for Aging + Brain Health Innovation (CABHI), which provided support to develop and test her idea through the Spark Program for early-stage solutions.

“Since he’s started using Linggo, I’ve observed a slowing down of my father’s cognitive decline. He’s more confident and conversational.”

With CABHI funding, Ly Tan piloted an exploratory study of the Linggo prototype with a group of older adults living with dementia, Alzheimer’s, and stroke who had lost the ability to speak, along with a group of non-verbal children with autism. 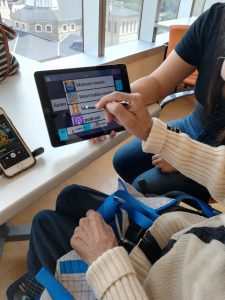 Ling Ly Tan, creator of the Linggo app, holds up a tablet to a study participant

“We’ve seen encouraging results. Some participants began speaking in words and phrases after three months of using Linggo,” Ly Tan says. Not only has the app supported communication, she reports, but in some cases has also helped maintain a sense of agency and reduced challenging behaviours.

Bobby is one of those improved participants. “Since he’s started using Linggo, I’ve observed a slowing down of my father’s cognitive decline,” Guyatree says. “He’s more confident and conversational. He’s able to independently make requests for everyday wants and needs, like asking for a coffee or to watch a movie, and letting care staff know he’s tired or needs help.”

Jenny Franchi, who lived with dementia for a decade before her passing in early 2020, was another participant in the study. Her daughter Johann Ingarra says she was “amazed” by the impact of the app and the team who facilitated the study.

“I really believe that the app and the Linggo team reached my mother. It brought out something in her that was completely new,” Johann says. “I see that there is hope for the lucky ones that have attention like this. I know it’s a study, but it’s actually made me tear up a couple of times.”

App soon to be made available to public

With Linggo’s initial success under her belt, Ly Tan has big plans for the future. She’s raised $250,000 to build a commercial version of the app, and is embarking on beta testing to further validate the technology with end users. She’s also majorly expanded the Linggo team, adding nine developers and designers to help refine the product.

“I really believe that the app and the Linggo team reached my mother. It brought out something in her that was completely new.” 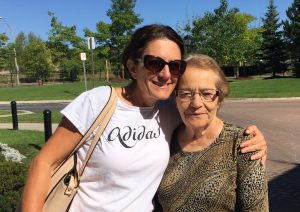 Jenny Franchi (right), who participated in the Linggo study, with her daughter Johann Ingarra (left)

The new version of Linggo – which Ly Tan says will use artificial intelligence, machine learning, and natural language processing to improve function – will be released to the public in May 2020. In the meantime, Ly Tan and her team are working toward spreading the findings of the CABHI-supported study and providing training and support for caregivers, guardians, and support workers who are using the technology with older adults.

“None of this could have happened without CABHI,” says Ly Tan. “They’ve been very supportive, especially in providing us direction as we build up to commercialization. CABHI has really made this happen.”

And as for Bobby? Guyatree reports that he’s doing well. She’s grateful that she and her father have the Linggo app to assist with everyday communication.

“Linggo has made it possible for my father to find his voice again,” she says.