In honour of Alzheimer’s Awareness Month, CABHI is releasing two new blogs a week about the innovative solutions changing the dementia narrative in Ontario, Canada, and around the world.

It’s every family member’s nightmare: a call from the long term care home that Mom or Dad has had a fall. Are they hurt? Do they need to be taken to the emergency room? And how can staff make sure this doesn’t happen again in the future?

Falls prevention is an important element in maintaining the health and well-being of older adults in long term care. Not only is prevention vital to keep residents – especially those living with dementia – safe, falls are costly to the Ontario healthcare system. Memory care falls cost Ontario an estimated annual amount of $760 million.

SafelyYou is a technology that uses wall-mounted cameras enabled with artificial intelligence (AI) to evaluate resident falls in long term care. A spinoff from UC Berkeley’s Artificial Intelligence Research Lab – one of the top five AI research groups in the world – SafelyYou reduces falls and resulting visits to the emergency room, and helps staff provide immediate and appropriate care to residents. Studies have shown that, on average, using SafelyYou decreases falls by 40% and emergency room visits by 70%.

The SafelyYou system is especially valuable for residents living with dementia, who often fall unwitnessed and are unable to express to staff how they ended up on the ground. From the more than 2,500 video recordings SafelyYou has analyzed to date, the company has found that a third of the time the resident didn’t fall at all, but moved themselves to the ground intentionally.

“What we do is provide a voice for those who can’t advocate for themselves at a critical time,” says George Netscher, CEO of SafelyYou. “Without the SafelyYou video, staff have to assume the worst and treat every unwitnessed fall as a possible head injury at high cost to the health system and often with dramatic setbacks to the resident’s condition.” 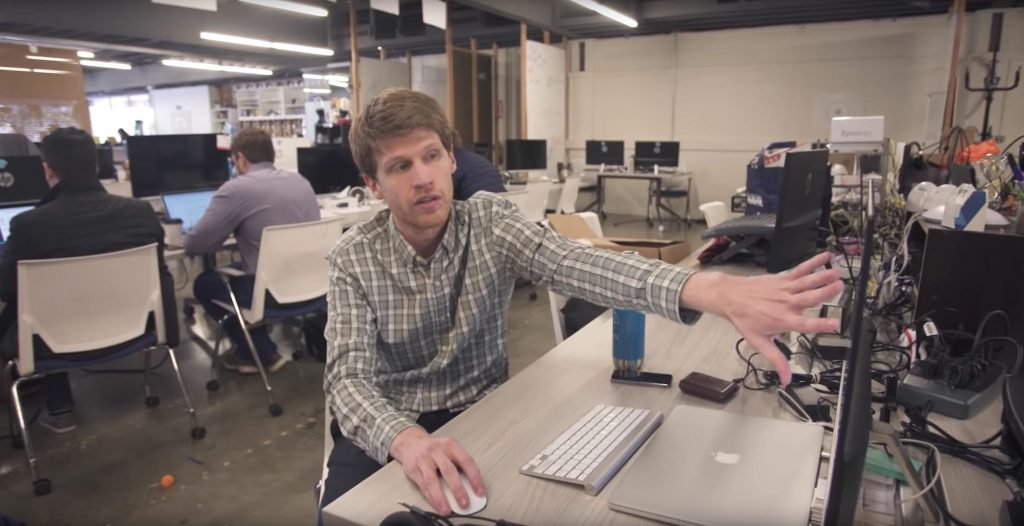 SafelyYou CEO George Netscher demonstrates how the system’s AI works on a computer.

In Ontario, falls by individuals living with dementia are a significant cause of hallway healthcare, and this group is one of the hardest to support in an emergency room. A recent study by SafelyYou at Carlton Senior Living in California showed that the technology reduced emergency medical service calls by 61% and decreased falls among participating residents with dementia by 31%.

Extrapolating these results across Ontario, SafelyYou could save the province approximately $671 million annually by reducing falls for residents living with dementia – savings that could be redirected to increase capacity in emergency departments to reduce the effects of hallway healthcare on patients.

With support from the Centre for Aging + Brain Health Innovation (CABHI), this innovative technology is now being tested in Ontario. Through its Industry Innovation Partnership Program, CABHI is facilitating the first-ever Canadian validation study of the SafelyYou technology with Toronto-based long-term care home Baycrest.

“We would certainly not be in the Canadian market without CABHI’s help,” says Netscher. “Having CABHI staff not only make introductions but also sit in on calls and guide potential customers is extremely powerful, and is something no other organization I know of does.”

As SafelyYou expands and attracts new customers within Ontario, it’s likely the company will hire a team and incorporate here, bringing direct foreign investment to the province.

With the potential cost-savings to the healthcare system, SafelyYou represents an incredible opportunity to help reduce hallways healthcare in Ontario. Most importantly, with CABHI’s support, SafelyYou is on its way to improving the lives and health outcomes of Ontario seniors, ensuring that their families have peace of mind that their loved ones are safe and cared for.